Hurray For (All) Shops

8 minutes of reading
Having grown up in a digital society, Millennials display a certain consumerist consistency that they share with their elders. Like the latter, they generally enjoy shopping and have a positive image of shops. Nonetheless, they are hoping for certain changes that would enable these stores to retain them as customers.

As pointed out earlier, Millennials follow a “philosophy” of pleasure framed by rationality, which tends to protect them from excesses. And this pleasure revolves in great part around shopping.

One would have thought that these Digital Natives would view shopping as obsolete, especially compared to other generations. However, this is far from being the case. 57% of Millennials see shopping as a pleasure, compared to just 42% of over 35s. However, the differences between the countries are quite pronounced. Indeed, the Italians (73%) and French (68%) are by far the most enthusiastic. Conversely, Hungarian Millennials are reluctant to associate shopping with the notion of pleasure. This is the only country in which a majority see it as a chore (57%).

Splashing out within reason

What we have already ascertained is that Millennials view themselves as responsible and pragmatic. This is demonstrated by their shopping habits. 73% declare that they put money aside rather than spend, a result that is consistent with their stated intentions to save over the coming months. It is worth noting that the figure is 9 points higher than for over 35s. 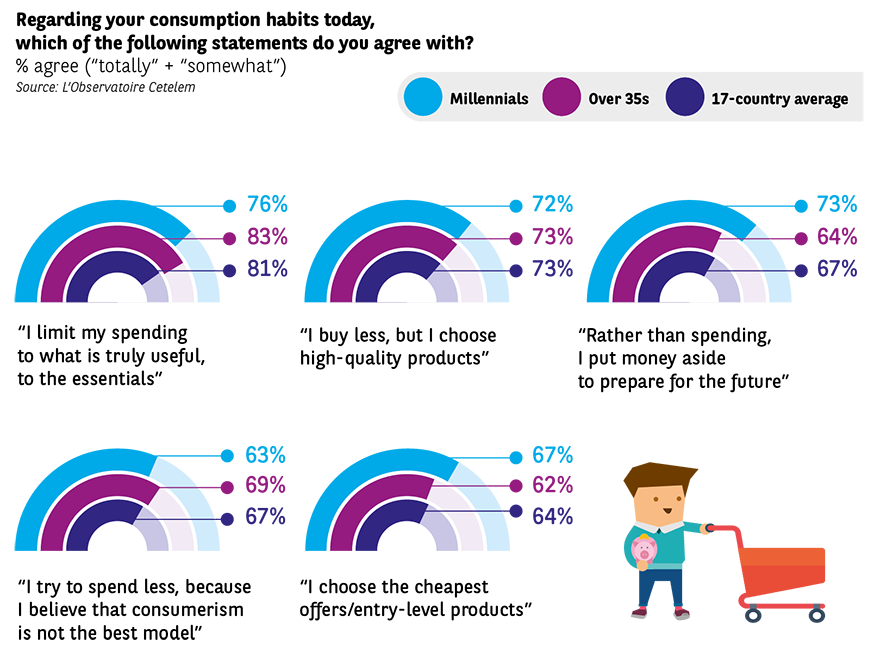 Spanish and Portuguese Millennials, who were particularly affected by the recent crisis, are the most likely to save (83% and 80%), while the Germans and Austrians, who have been emboldened by the economic health of their countries, have the highest propensity to spend (61% and 63%). Posting a result lower than the overall average (67%), French Millennials are in line with their country’s consumerist trends.

The reluctance of Millennials to engage in wanton spending can also be seen in their desire to spend money purely on what is useful. 76% adhere to this approach. Once again, the Spanish and Portuguese lead the way on this point, but others on the continent hold relatively similar views on the topic.

It is therefore no surprise that Millennials prefer the cheapest purchasing options, even more so than over 35s (67% and 62%). This rationality is strengthened by the fact that, because they are just starting out in their professional lives, their purchasing power is lower than that of their elders. Astonishingly, the Germans and Austrians occupy the top two spots in this particular ranking, a sign that budgetary prudence is serious business in these countries, regardless of age and status.

Nonetheless, spending for pleasure is alive and well, but quality trumps quantity. 72% of Millennials prefer to buy less, but more shrewdly. This is notably the case in Bulgaria, Romania and Hungary (88%, 85% and 82%). Quality is considered synonymous with durability, while purchases are almost viewed as investments.

And another sign that our world is changing is the fact that Millennials are less prepared to reject consumerism than over 35s (63% vs. 69%).

All stores are equally popular

One might have expected Millennials to be more selective about the establishments they frequent, choosing premises that are all about pleasure over places where people shop by default, chic and trendy boutiques over humdrum supermarkets, where the only aim is to fill one’s trolley. Once again here, the results are surprising. This is one of the key findings of the 2018 L’Observatoire Cetelem on Consumption: Millennials like shops, all shops. 78% actually enjoy visiting large food stores (vs. an overall average of 78%), with the Romanians displaying the most enthusiasm (89%) and the Czechs a little more restraint (69%). 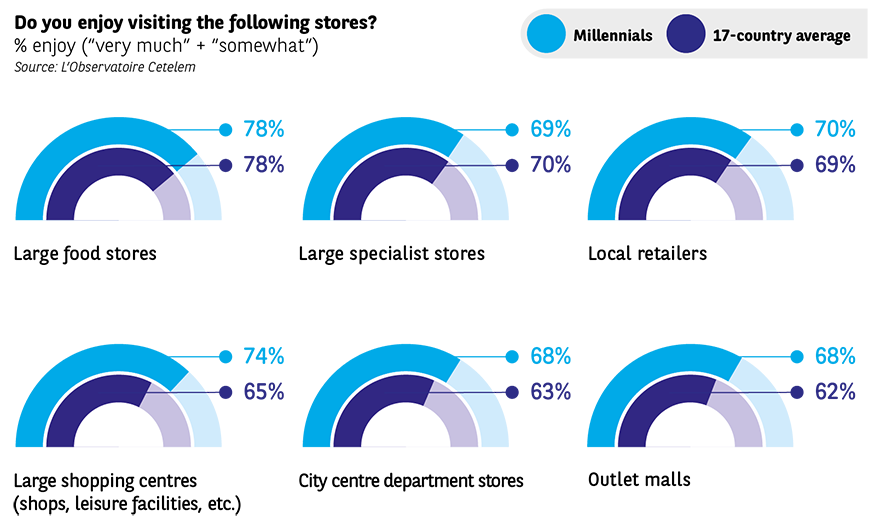 Do shopping centres featuring both shops and leisure facilities appeal to Millennials? Yes, in 74% of cases, 9 points more than the overall average! They are particularly popular in Romania, Portugal and Spain (87%, 84% and 83%). The Austrians, Belgians and Germans are a little less drawn to them (62%, 64% and 65%).

Local retailers are the third most popular type of store among European Millennials. 70% are frequent visitors and their popularity is particularly marked in Sweden, Denmark, Norway and France (81%, 78%, 76% and 76%).

Other types of store hold an almost equal level of appeal. This is true of large specialist stores, which 69% of Millennials enjoy frequenting. The 18-35 age group are just starting out in life, which means that they are starting to furnish and decorate their homes and do a little DIY. It is hardly surprising, therefore, that the differences between the countries are relatively minimal, or at least less pronounced than previously. The Romanians, Bulgarians and Hungarians are the most ardent fans of these stores (81%, 78% and 78%), while the Czechs, Slovaks and Portuguese are the least enthusiastic (56%, 61% and 61%). The figure for French Millennials is slightly above average (73%).

City centre department stores are also popular among Millennials, with 68% expressing a positive view. Again, there is little to separate the countries. The Portuguese are the most likely to opt for this type of retail experience, while the Austrians are the least likely. Outlet malls, which offer branded products at factory prices, are preferred by 68% of European Millennials.

Independence comes at a premium

Like the other Europeans surveyed, Millennials appear to be particularly fond of independent shops. This is true for 56% of respondents (vs. 58% on average). 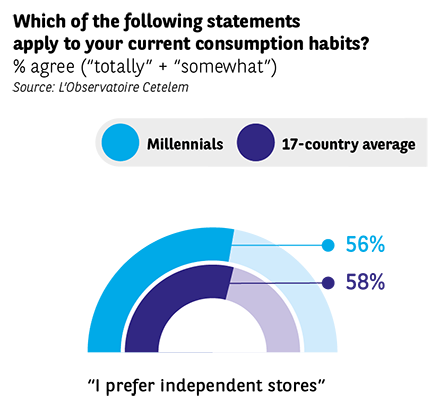 The result highlights the fact that Millennials are not prepared to place all their trust in major international retail brands, despite their fondness for the latter, and that uniqueness and personality are still relevant and appealing to younger consumers.

But what about shopping 100% online?

When it comes to the supposed war between e-commerce and physical stores, the 2014 L’Observatoire Cetelem de la Consommation (“Shops and the internet: consumers demand interdependence”) had already highlighted the fact that they can happily coexist. There is no indication that all Millennials are migrating towards digital shopping. The most “significant” figure when it comes to examining the web’s supremacy is the 16% of European Millennials who buy cultural products exclusively online. This is a surprisingly small proportion given the media’s pronouncements on the topic. In all consumer segments, the scores are in the region of 10%. 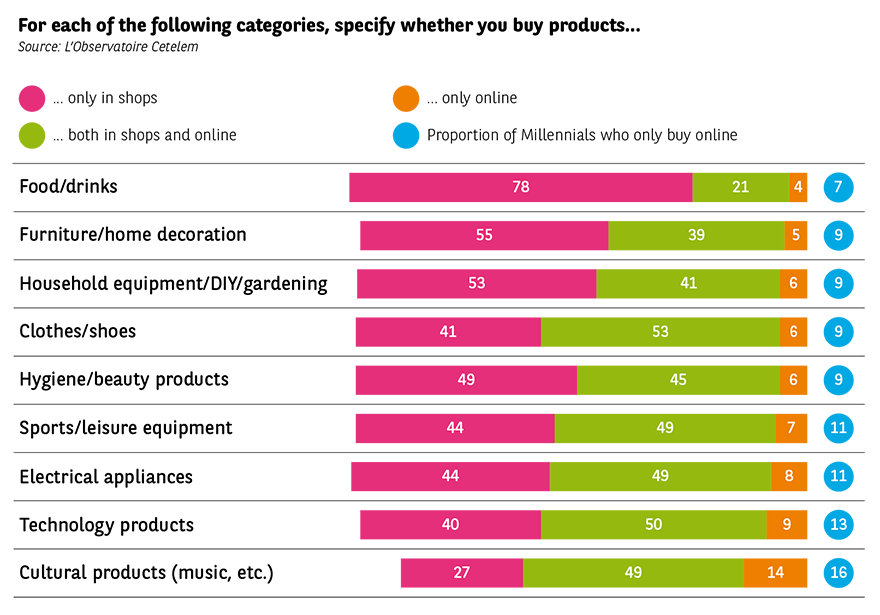 The reasons why all types of shop are so appealing to Millennials could be summed up by the concept of “product experience” that is held so dear by trend forecasting agencies, marketers and retailers themselves. In this respect, Millennials and over 35s are quite similar, with both groups enjoying physical shopping. Like their elders, they place a great deal of importance on seeing and touching a product (60%). They like the instantaneous nature of in-store purchases, which enable them to take their chosen product home (54%). They appreciate being given a demonstration, as this reassures them that they are making the right choice (40%). However, they are more likely than their elders to see physical shopping as an excuse for an outing (20% vs. 14%). The Portuguese, Slovaks and Romanians are more enthusiastic regarding the first three questions, while French Millennials are the most likely to treat shopping as a reason to go out.

8 out of 10 European Millennials are happy with shop assistants and there is no marked dissatisfaction in any of the countries surveyed. Only 19% deem them to be underqualified. 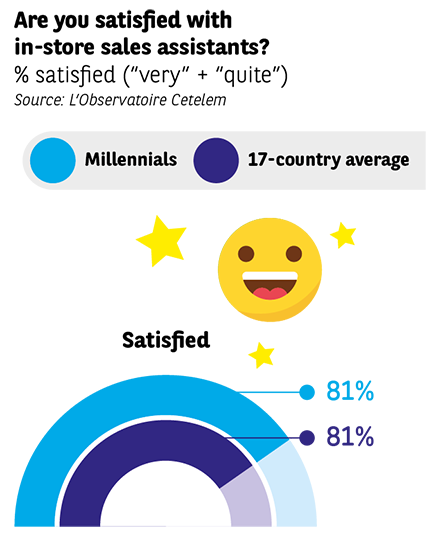 And yet, in the long run it seems that sales staff will have less of an influence on product experience. Indeed, 52% of Millennials believe that in 10 years, sales assistants will have been replaced by virtual advisors or artificial intelligence. 46% of over 35s are of the same opinion. 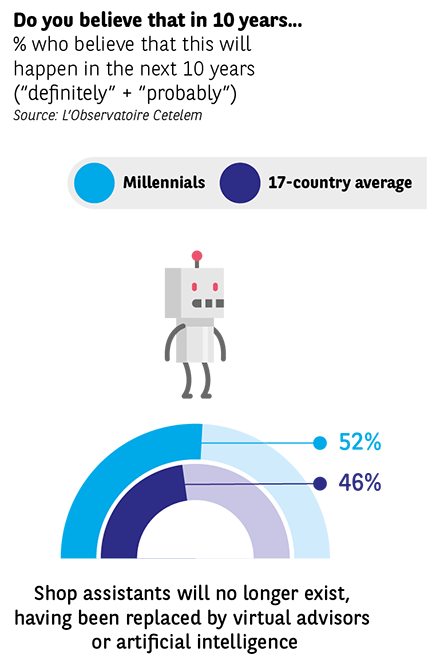 Moreover, only 17% of Millennials state that being able to receive the advice of a sales assistant is an inherent advantage of physical shopping.

Their satisfaction is chiefly dependent on the hospitability and friendliness of staff (77%). Once again, all European Millennials are sensitive to these factors, with the Bulgarians, Hungarians and Czechs tending to be a little more reserved on this topic (63%, 66% and 66%). The importance of the advisory role played by sales assistants is also underlined by 73% of those questioned, much like their product knowledge (72%) and their willingness to help (71%). The aforementioned countries are again among the most sceptical regarding these points, while the popularity of sales staff is highest in Portugal, Spain and Poland, with France posting perfectly average scores in every area. 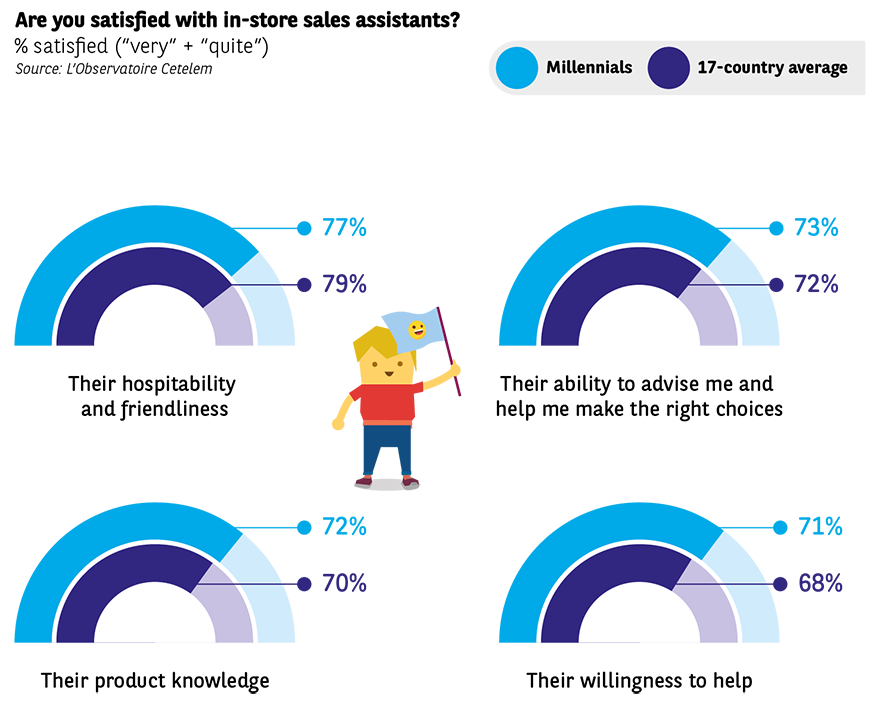 Sub-section 5
Personal Circumstances and National Situations are Improving
If we consider all these parameters alongside the favourable image Millennials have of themselves, it is not surprising to see them adopt a positive attitude on all fronts, be it in relation to the si
< Read the previous sub-section
Sub-section 7
A Digital Relationship With Stores
In the preamble, we mentioned one of the numerous monikers given to Millennials: Digital Natives. However, their relationship with physical stores has not been usurped by their digital proclivities an
Read the next sub-section >