Car sales are in rude health

4 minutes of reading
The indicator that best illustrates the car industry’s resistance to pressure is sales. Having experienced growth of between 4% and 5% from 2011 to 2014, and 1.6% in 2015, the global market reached new heights.
A new record: 87 million new light-vehicle registrations. This excellent health has also had a positive financial impact. Most car makers have seen their profits rise, in some cases significantly. However, these exceptional sales figures mask the disparities that exist from one region to the next, in line with their respective economic contexts. 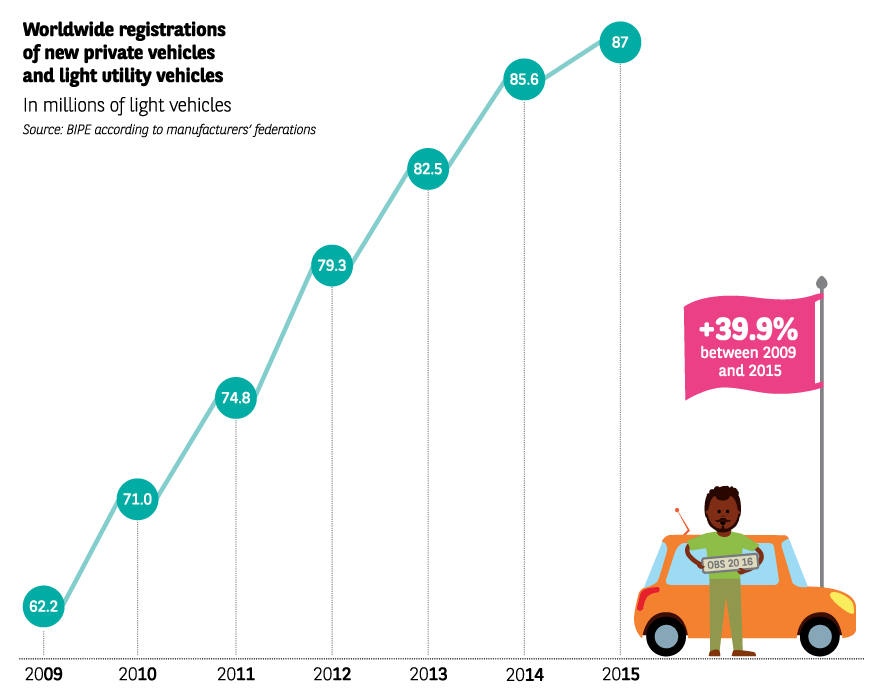 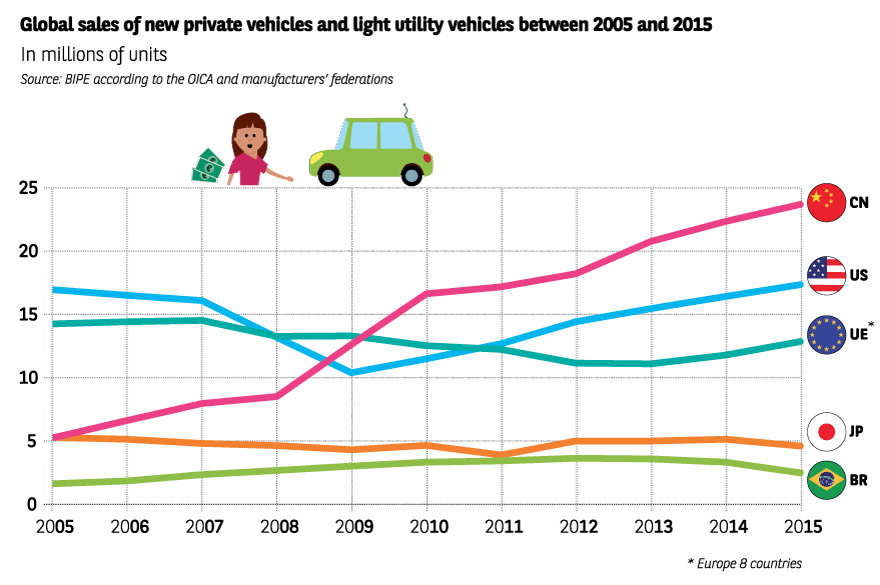 The US breaks records

In just two years, the sharp drop in oil prices, extremely low interest rates and renewed confidence in the economy restored the US market to its former splendour. Household demand stayed strong, while companies updated their fleets after years of cost saving. The American automotive industry hit new heights in 2015, beating the sales record set in 2000 with 17.4 million units (+5.7%, including pick-ups). This appetite for new cars led the ratio between used and new car sales to narrow from 3.2 in 2010 to 2.2 in 2015. Neighbouring Mexico also capitalised on this upward sales trend, with a rise of 19% to 1.4 million sales.

An upturn across Europe

Europe has joined in the euphoria. After years of gloom following the crisis of 2008-2009, which saw a general ageing of the car population, the market was suddenly playing mechanical catchup. The restoration of household spending power, rising employment and incomes, falling fuel prices and practically zero inflation created the perfect storm for a resurgence of the market. The ratio of used to new car sales, which had peaked during the crisis, has narrowed once again. Drawn in by the industry’s latest developments, households are heading back to dealerships, many aiming to replace the vehicles purchased en masse through the scrappage schemes of 2009-2010. Meanwhile, businesses have made the most of a period of strong investment and highly appealing leasing offers to replenish their vehicle fleets.

The Italian and Spanish markets, which had contracted by up to two-thirds of their value, also bounced back last year (+16% in Italy and +23% in Spain). In Spain, the million vehicle mark was exceeded for the first time since 2008. Growth figures for the German, French and UK markets are less impressive, with the industry’s resurgence in these countries having begun much earlier, but they remain healthy at between 5 and 7%.

In China, the macroeconomic downturn has led to a fresh drop in the growth of sales, as it had in 2014. After a decade of breakneck expansion, the world’s largest market (27% of total sales in 2015) ended the year with annual growth of 6%, to 23.7 million vehicles. At the beginning of the year, sales were unimpressive due to the after-effects of panic buying prompted by rumours in late 2014 of registration restrictions in some cities. Worse still, for the first time since the start of the boom triggered at the turn of the millennium, negative yearon-year figures were recorded during the summer months.
The slowing down of economic growth and stock market turbulence precipitated a crisis of confidence that ultimately dissuaded many potential buyers. Government measures to reduce taxes on small-engined vehicles were required to spark the market back to life in the final months of 2015.

The decline continues in japan

In the early 1990s, annual sales of light vehicles in Japan exceed 7 million units. For around a decade, the figure fluctuated between 4 and 5 million, under the varying influence of government support measures. The world’s third largest economy only narrowly avoided a second recession in mid-2015. The VAT increase applied in April 2014 (from 5% to 8%) also hindered spending on durable goods, cars in particular.
In anticipation of this measure, households made their purchases ahead of time. They have kept away from dealerships in their droves since it was brought in. Moreover, mini-cars with an engine size of less than 660 cc, a Japanese peculiarity, saw their annual taxation levels increase in April 2015. Over the course of that year, sales of such vehicles fell by 16.6%, while those of traditional vehicles dropped by 4%. In total, the Japanese market shrank by more than 10% in 2015.

Having plunged into recession in 2015, Brazil is now dealing with tough economic conditions, notably a rapidly rising unemployment rate combined with restricted access to finance. The political crisis triggered by corruption scandals has only served to exacerbate an already tense climate. In this context, the Brazilian market’s collapse in 2015 was the worst recorded in 28 years. Sales of cars and light utility vehicles fell by 25.6% to 2.48 million units.

Sub-section 3
An element of doubt
Volkswagen’s «Dieselgate» scandal of 2015 opened the eyes of consumers to the dark side of the sector, whose reputation had never previously been smeared by such underhand practices. And the Ger
< Read the previous sub-section
Sub-section 5
Segmented offerins with wide appeal
The SUV segment has been the quickest to get back to speed. Already accounting for more than 50% of light-vehicle registrations in the United States (pick-ups included), the market share of SUVs in
Read the next sub-section >