Purchasing power is under threat from inflation

In terms of purchasing power, things are looking better overall

This 2022 Observatoire Cetelem Barometer reveals a more significant change in the opinions of Europeans when asked about their purchasing power, which they have traditionally considered to have declined with each successive survey (Fig. 10 Barometer / Context). The feeling that it has increased is up 4 points, while the belief that it has fallen is down 3 points. The proportion of Europeans who feel that nothing has changed has remained more or less stable (-1 pt).

In all countries, the perception that purchasing power has increased is palpable, with the Spanish and the Swedes being the most likely to hold this view. Only in Austria is there a degree of stability. At the risk of repeating ourselves, these figures are lower overall than those reported in the 2019 edition, prior to the Covid crisis.

Disparities between the nations are much more significant when it comes to the decline in purchasing power, with a clear geographical divide emerging once again. While 46% of Romanians and Hungarians point to a drop in purchasing power, the Swedes (22%) and the Danes (25%) are much less vocal on this issue. The French, for their part, still hold a negative perception, with a score of 40%.

The spectre of inflation haunts Europeans once more

A development that is closely linked to purchasing power, as well as being a central aspect of this 2022 Barometer, is the sharp increase in the perception that prices are on the rise. 1 in 2 Europeans are now of the belief that prices have increased significantly (+25 pts) (Fig. 11 Barometer).

And barely more than 1 in 10 believe that they have remained stable or fallen. It is worth remembering that respondents were interviewed between 5 and 19 November 2021. Throughout the summer and again when schools went back in September, much of the news revolved around rising prices, particularly those of raw materials, which in turn have had an impact on fuel and heating costs. And the statistical data has reflected a notable uptick in inflation as a whole. This was a topic that inevitably gained further traction as we entered the winter months and the health situation once more became a major concern.

Looking at the average score, it is obvious that the impression that prices are rising is shared in many countries, with those in Eastern Europe once again unified in expressing considerable pessimism (Fig. 12 Barometer). Thus, 8 out of 10 Bulgarians report a substantial increase (in other countries in the region the average figure is 7 out of 10), while conversely, fewer than 3 in 10 Swedes and Danes are of this view. Interestingly, with “only” 34% of consumers flagging a marked increase in prices, the French are not among the most pessimistic on this issue. However, it is worth underlining that inflation in France was lower than in many other European countries at the time of the survey in November (Fig. 13 Barometer / Context). This goes some way to explaining such an unusual degree of contentment. 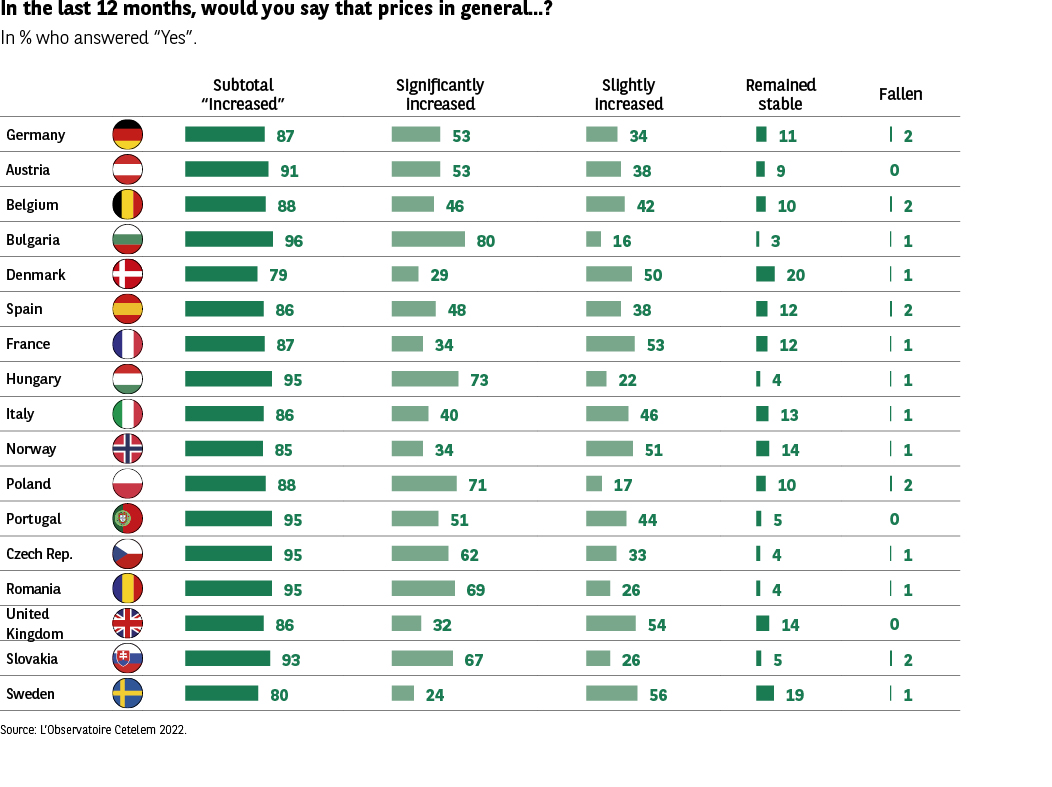 Download this infographic for your presentations
Fig. 13 Barometer / Context 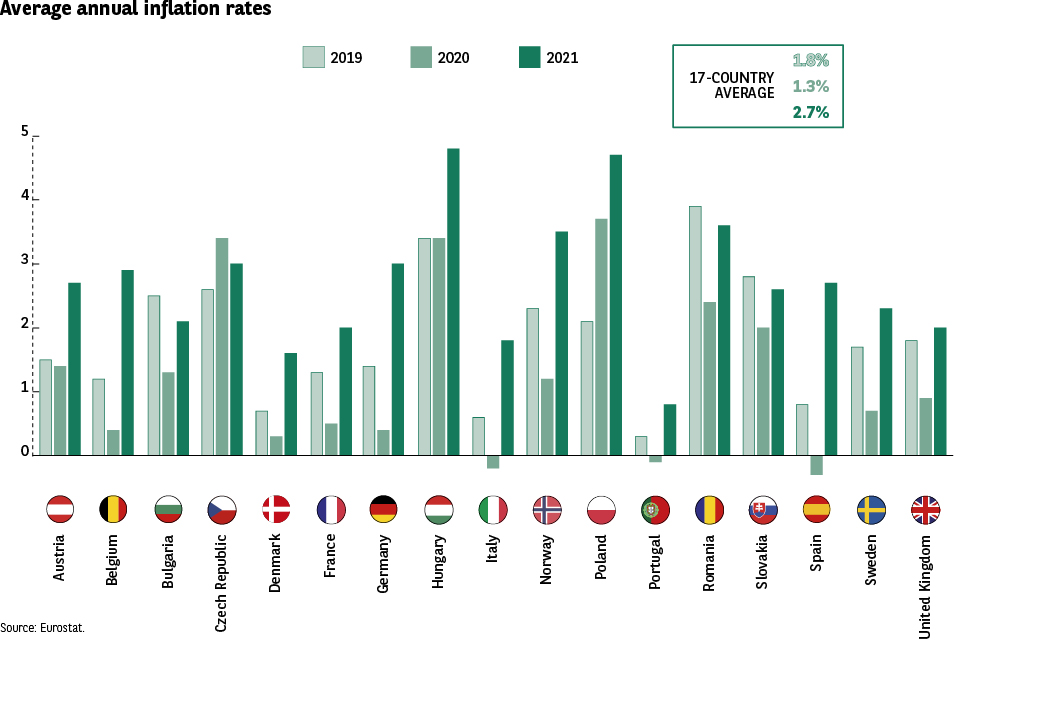 Since the last pre-crisis edition of the Barometer in 2019, however, geographical perceptions have been turned on their head (Fig. 14 Barometer). The feeling that prices have risen is more prevalent in Western Europe, although significant differences can be observed (+16 pts in Italy, +14 pts in Germany and Portugal). 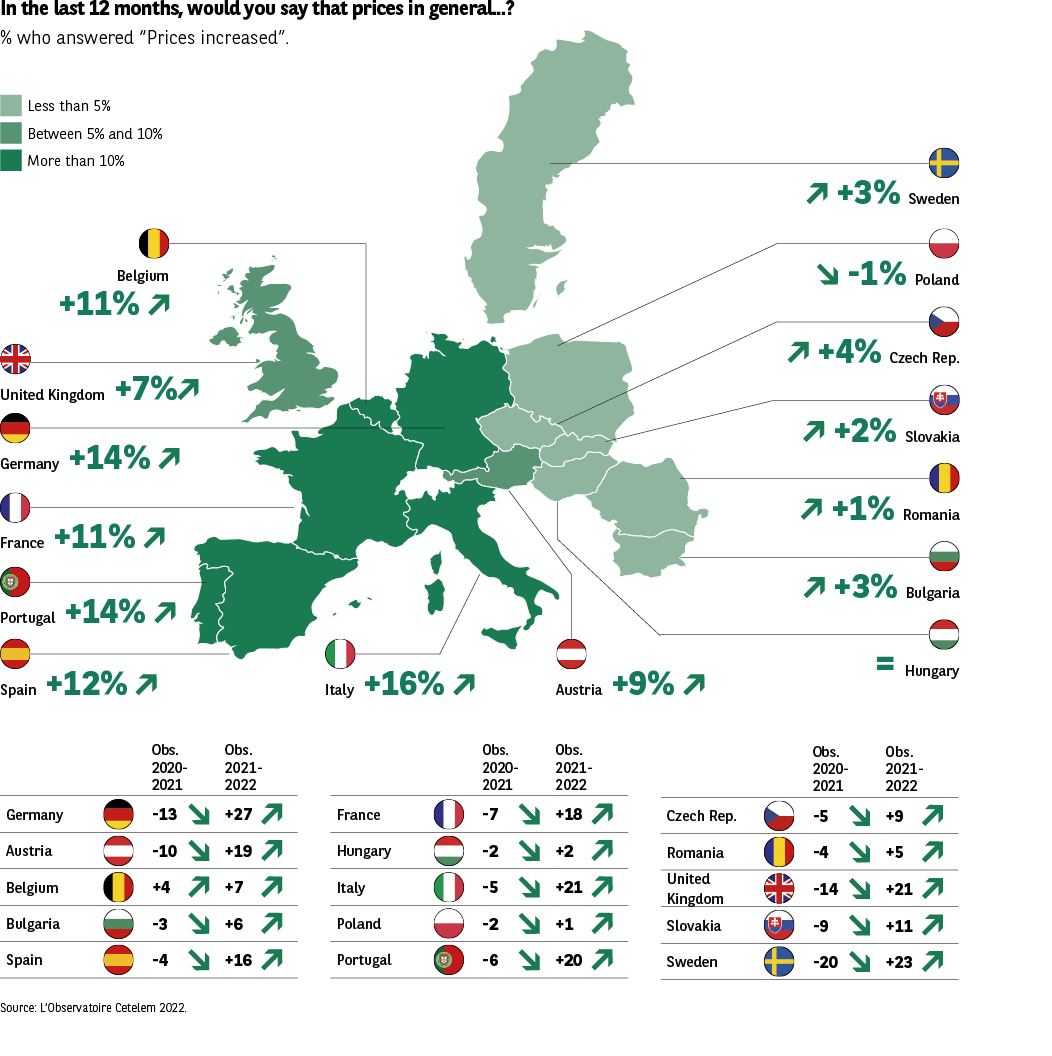 The fact that these results co-exist with an impression among Europeans that their purchasing power has remained stable indicates that, when it comes to weighing up what has happened in the past and what might occur in the future, the economic sense and rationality of consumers is often more sophisticated than they are given credit for. One would wager that barring a sudden inversion of price trends next year, which seems unlikely, by then many more Europeans will feel that their purchasing power has deteriorated. 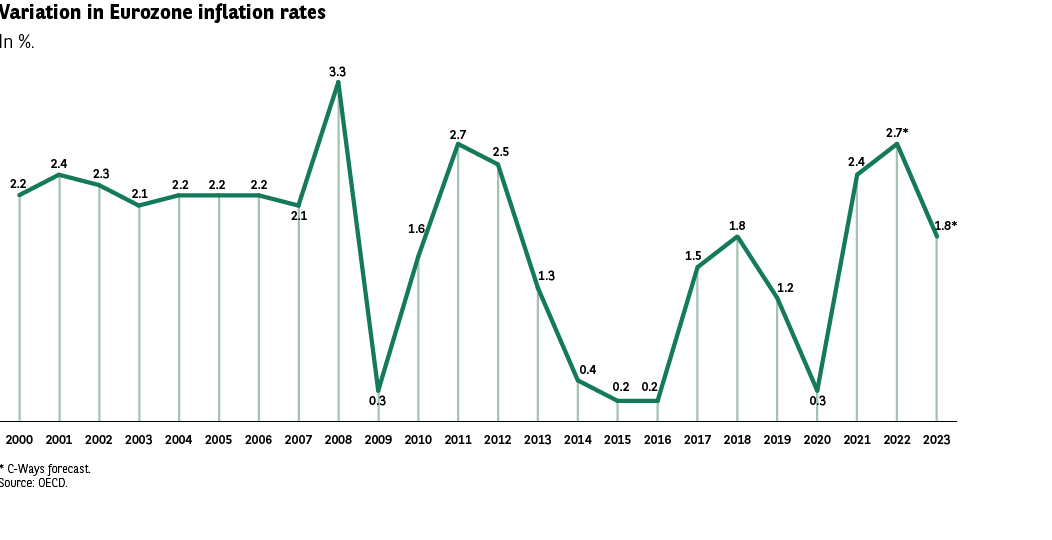 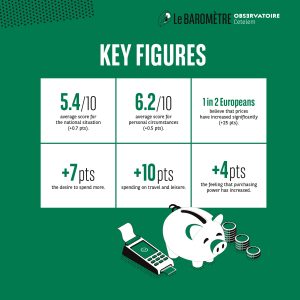 Sub-section 3
Spending more while remaining prudent
The health crisis had led to a marked decline in people’s desire to spend and a greater willingness to save, with the notion of precautionary saving being more relevant that ever before. The 2022 Ob
< Read the previous sub-section
Sub-section 5
A concept that is gaining recognition
The concept of the circular economy has come a long way since it first emerged in 1990. When combined, these two simple words manage to conjure up a degree of mystery in the eyes of Europeans. Yet, th
Read the next sub-section >