Going back in history, especially pre-history, mankind was nomadic.
Mobility was essential to both the survival and security of humans. Since the early 20th century, this mobility has been embodied by the automobile. Every day and during the weekends and holidays, cars are a central part of people’s journeys.
However, under the direct influence of structural economic, environmental and societal changes, of which climate change is one of the most striking examples, behaviours and practices are evolving. The automobile’s influence is being eroded.
The development of public transport and the emergence of soft mobility, particularly in towns and cities, are increasingly providing natural and complementary alternatives to cars, which are seeing their central role in society diminish.

At the heart of people’s journeys…

In every imaginable day-to-day situation, cars unquestionably remain the ideal mode of transport. This is especially true when shopping or enjoying sporting activities (Fig. 34). 9 out of 10 respondents say they use their vehicle often or very often in these cases. When they go away for the weekend or on holiday, 8 out of 10 choose to go by car.
This proportion drops slightly when it comes to daily journeys, including commuting. In these situations, three-quarters of people use their car.
It is worth noting that this score is down by 5 points compared to last year, presumably due to the impact of the global health crisis, which led to fewer people travelling to their workplace.

With such high scores, it makes sense that the differences between countries are smaller. The Austrians, the French and the British are slightly less likely than average to use their cars on a daily basis (63%, 64% and 64%), unlike the Chinese, the Mexicans and the South Africans (90%). 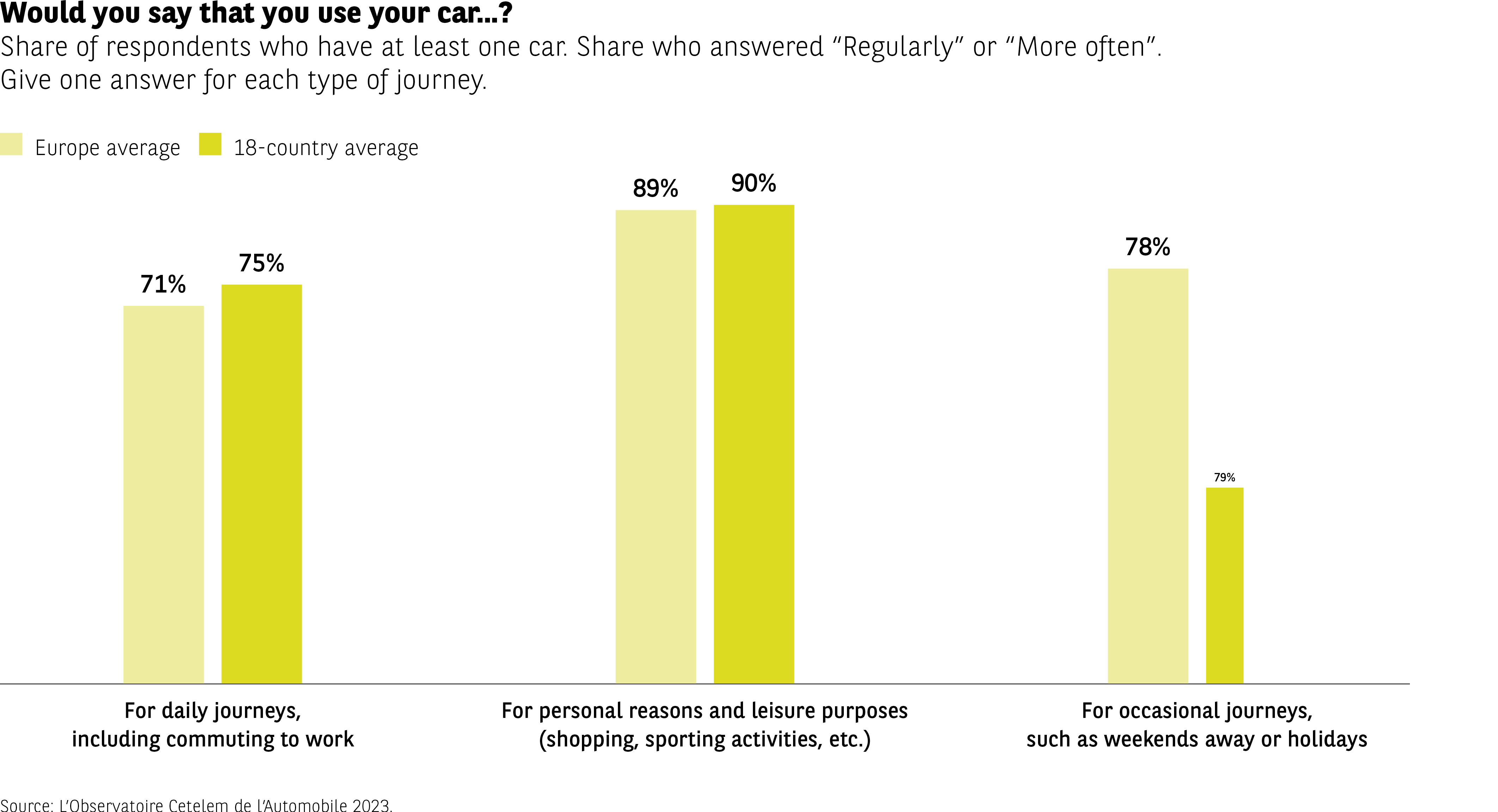 More at home on rural roads than on city streets

The types of roads motorists use reveals a clearer geographical divide. Indeed, the Europeans tend to use their cars equally in urban and rural environments, while the rest of the world use their vehicles mainly in towns and cities. If we consider the world as a whole, 1 in 2 people say they use their vehicle in both urban and rural settings. The countries where car use is more varied tend to be the smaller nations in terms of size, as illustrated by the fact that 68% of Dutch and 60% of Belgian drivers use their vehicle in both rural and urban environments (Fig. 35). The countries where people drive their cars primarily, not to say exclusively, in urban areas tend to be those containing vast expanses of land and numerous megacities, such as Brazil and China (88% and 80%). 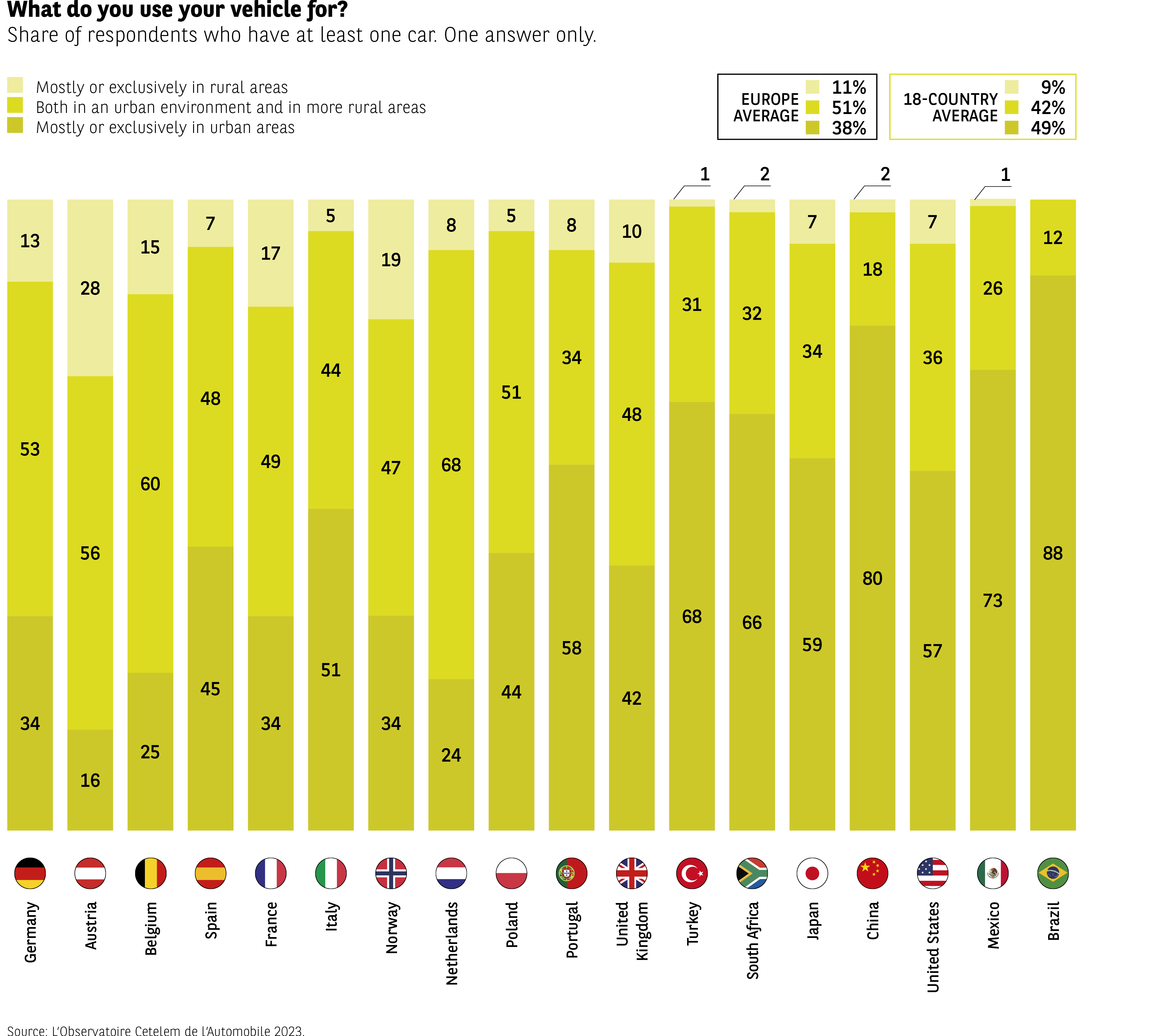 The bigger the country, the more people drive

One measure of automobility is the distance travelled. According to the data collected, motorists drive an average of 13,600 km a year in the countries surveyed (Fig. 36). And once again, there is a correlation between the size of the country and the number of kilometres driven. The top four nations in this particular ranking are Brazil, Turkey, China and Mexico, the 5th, 37th, 4th and 14th largest countries in the world, respectively. Italy sits in 5th place, pulling off the “feat” of surpassing the United States, the world’s 3rd largest country in terms of surface area. It is interesting to note that France lies at the bottom of this ranking, with an average of 12,400 km travelled per year.

Download this infographic for your presentations
The average distance covered by motorists in Europe is 13,150 km per year.

As we have just established, the French are not the most avid motorists. The trend over the last 20 years, in terms of the mileage they cover, does nothing to suggest that this will change any time soon. Over this period, the data collected by the SDES (a French data and statistical analysis service) points to a decline that has been further exacerbated by Covid. The average distance travelled in 2020 dipped below the 10,000 km mark, from almost 14,000 km in the early 2000s (Fig. 37). The rapid rise of remote working during the pandemic is the crucial factor that explains this significant drop. The next few years will tell us whether this is a temporary blip or a major societal change. 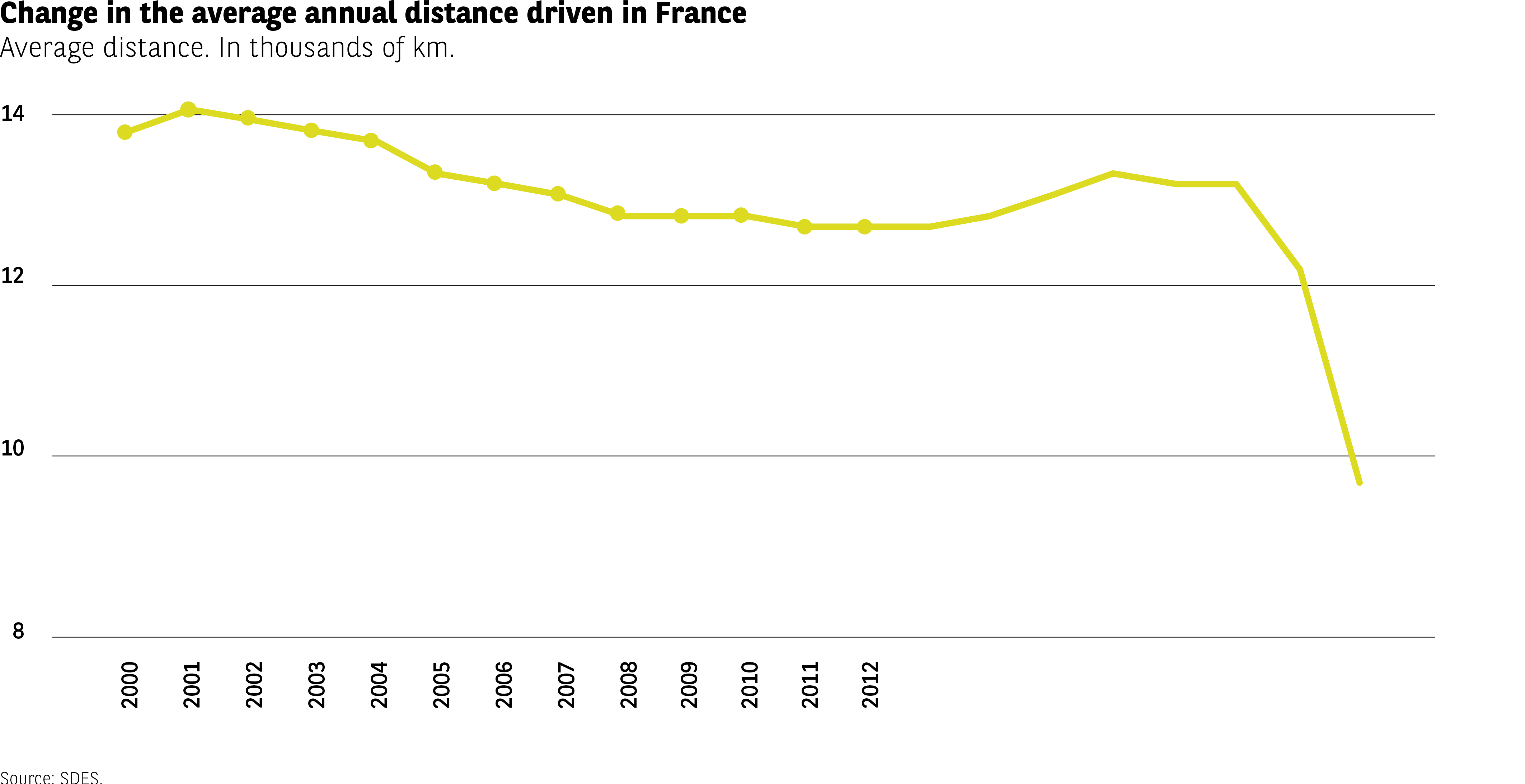 The fact that motorists frequently use their cars does not prevent them from sometimes turning to other forms of mobility (Fig. 38). Thus, while 4 out of 10 motorists would never give up their car, almost half of those surveyed embrace soft mobility, public transport or train travel alongside motoring. In four of the countries surveyed, a majority of respondents prefer to use their car: the UK, Germany, France and, most fervently, the USA. Meanwhile, China, Turkey and Japan are where we find the highest proportions of motorists who use soft mobility solutions or public transport. Carsharing and ridesharing still only appeal to a relatively small percentage of motorists (11%). Less economically developed countries seem to be the keenest on these modes of transport, probably because it is common for people there to travel in mini-buses or family cars that are used in a similar way. 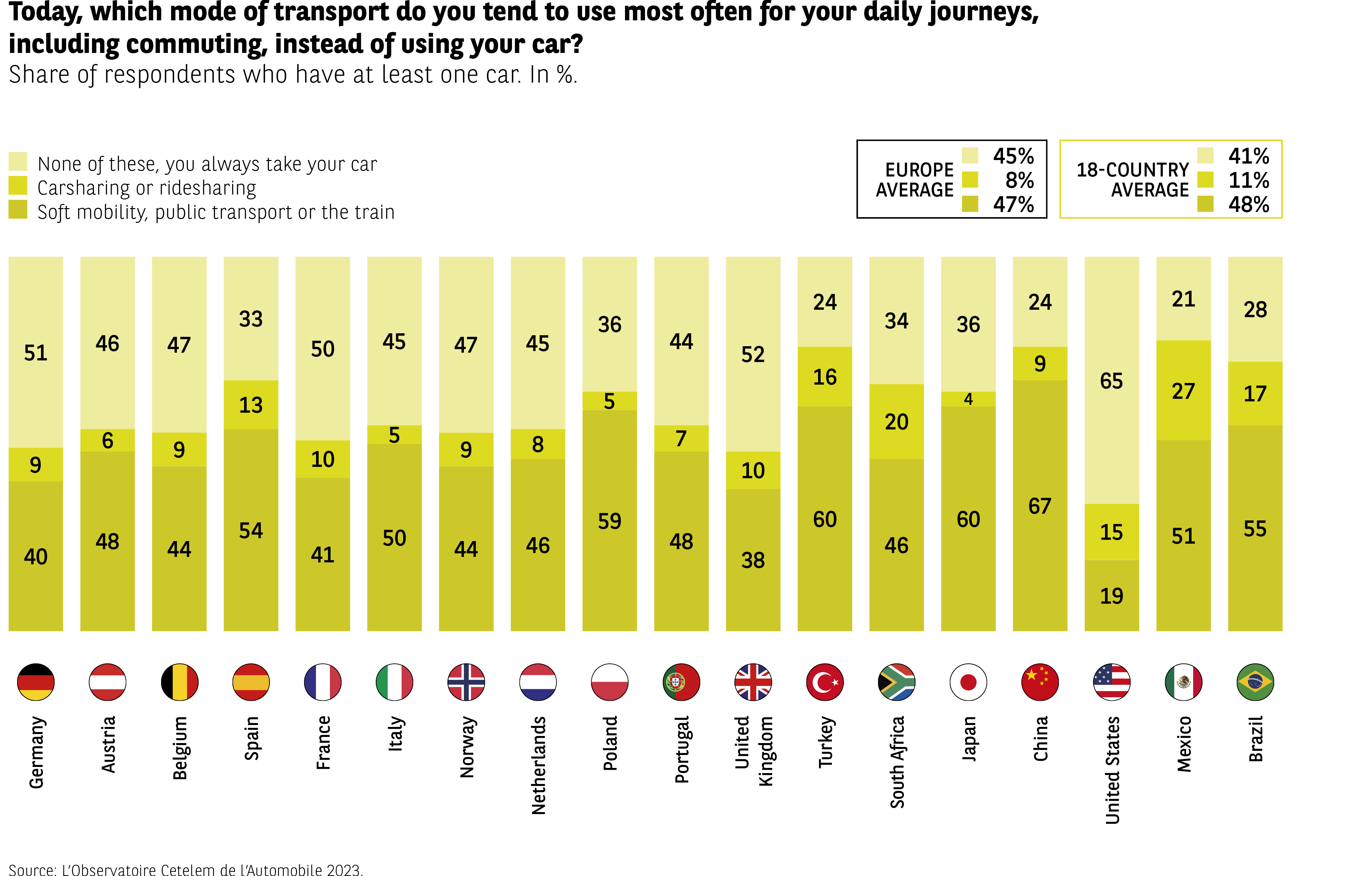 These overall results conceal a clear divide between rural and urban areas. 56% of those who live in the country invariably use their cars on a daily basis, compared with only 35% of city dwellers. In France, the ratio is almost 2:1 (64% vs. 36%).
Conversely, more than half of all urbanites opt for soft mobility, public transport or trains, with the figure for rural populations reaching just 35%.

We will examine this territorial divide in more detail later on.

An even balance when it comes to leisure and holiday use

The results for private journeys and leisure travel are no great departure from the previous figures (Fig. 39). The scores are more or less the same, with 42% always using their car and 44% opting for soft mobility, public transport or the train. From one country to the next, the balance is practically identical. 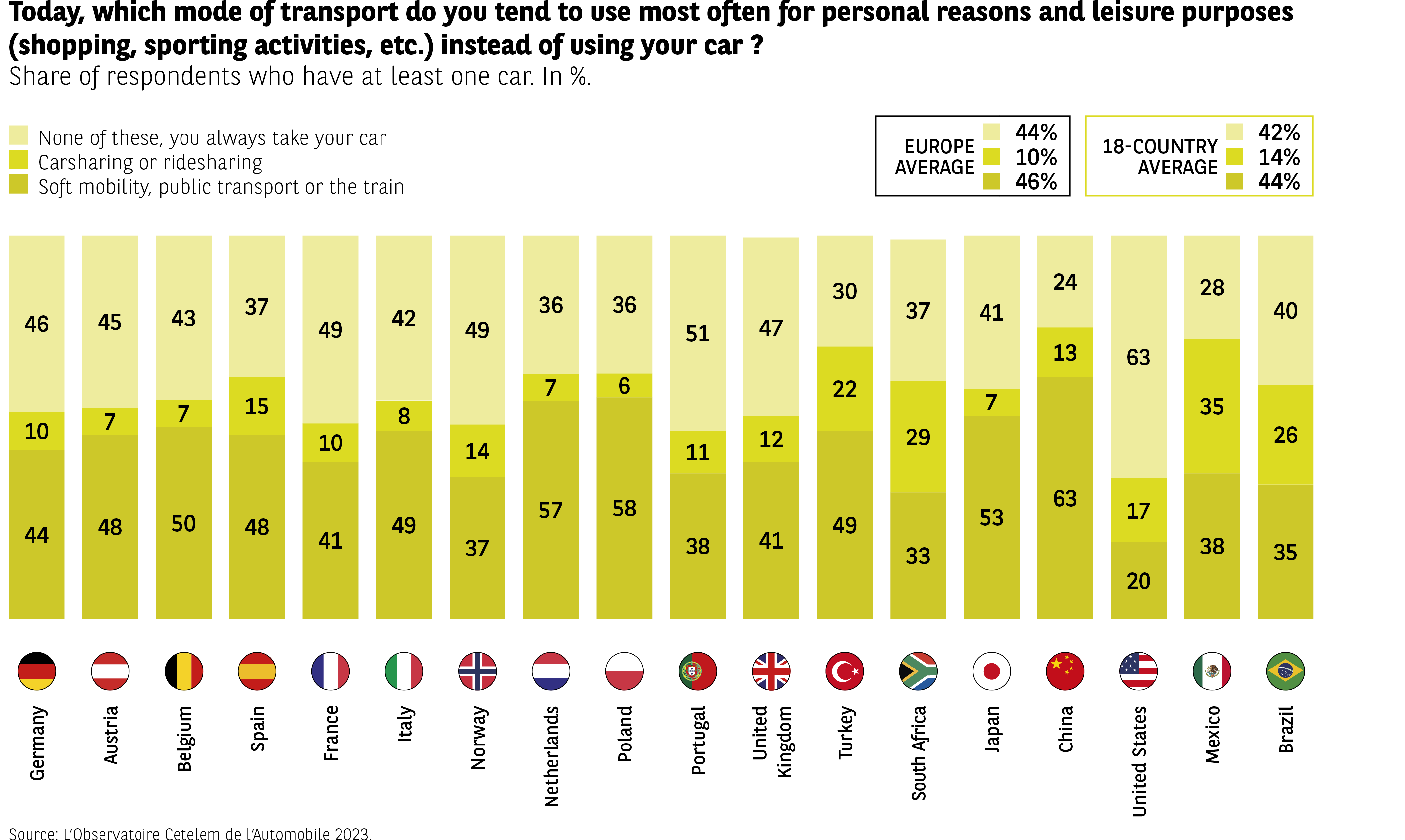 Do weekend trips or holidays move the needle? Not really. Here again, 4 out of 10 people invariably use their car for these purposes. For long distances, trains and coaches appear to be serious competitors of the automobile (Fig. 40). 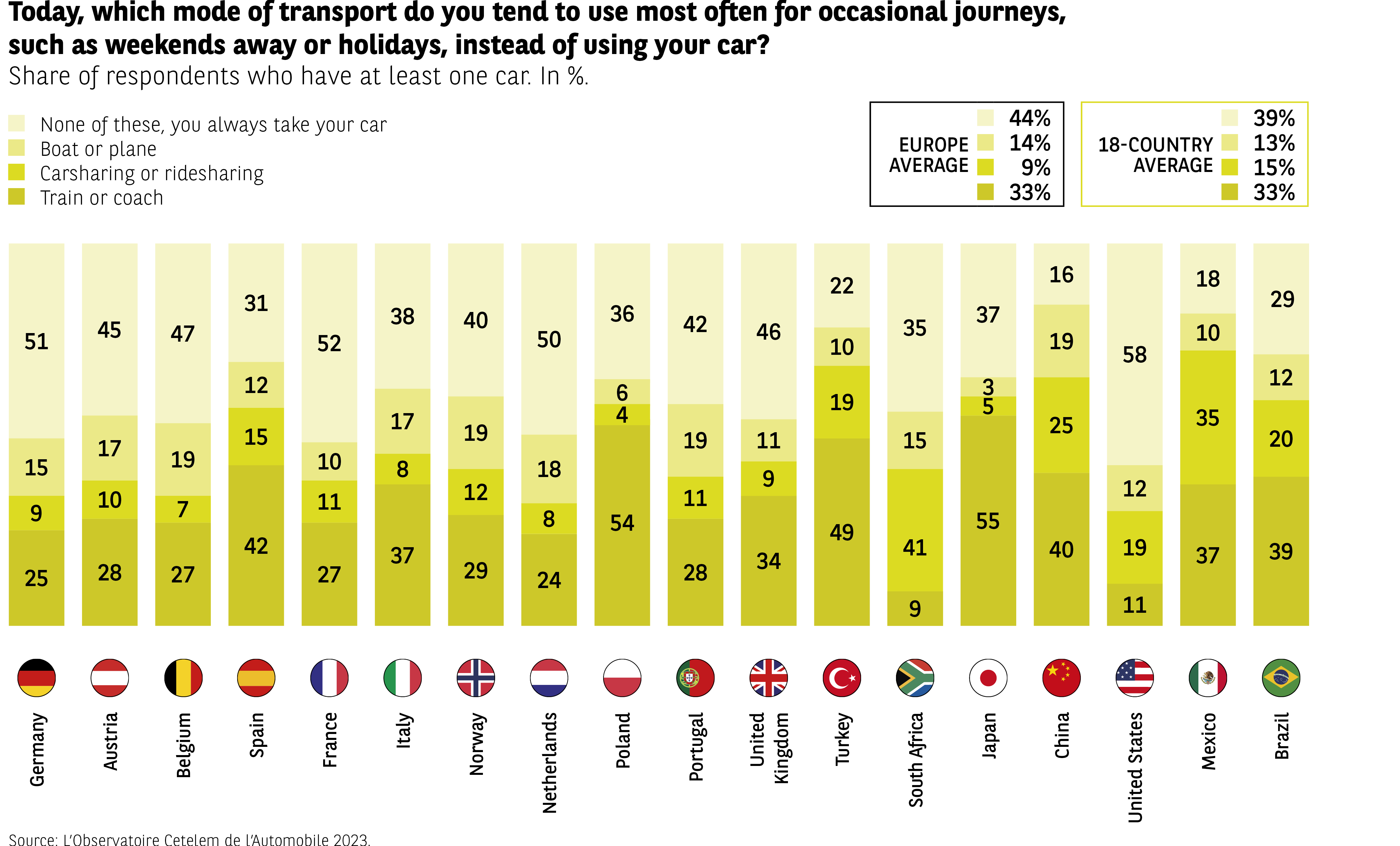 Download this infographic for your presentations
More than 4 out of 10 people always use their car for their daily journeys.

Sub-section 4
Cutting costs, at any cost
Faced with an economic situation that is looking ever bleaker, motorists are far from complacent. They believe that the cost of running their vehicle is too high. 6 out of 10 are adop
< Read the previous sub-section
Sub-section 6
The mobility mix: an urban trend
The relative dominance of cars for everyday use, going away on holiday and leisure purposes has done nothing to halt the rising popularity of soft mobility. Indeed, with almost 1 in 2 peo
Read the next sub-section >