The mobility mix: an urban trend

The uneven emergence of soft mobility

The relative dominance of cars for everyday use, going away on holiday and leisure purposes has done nothing to halt the rising popularity of soft mobility. Indeed, with almost 1 in 2 people using a bicycle, scooter or motorised two-wheeler, it is clear that this is not just a niche preference, but a real and increasingly appealing alternative. Admittedly, this is more prevalent in European countries. Moreover, the disparities are more significant than for most of the other topics examined by this survey so far. In the Netherlands, where 85% of respondents have made soft mobility a part of their lives, this is a widespread societal attitude in all parts of the country (see below). The Chinese, who tend to be just as readily associated with cycling, but also the Poles, favour soft mobility as a complement to car use. In contrast, the Americans, Portuguese and South Africans have been slow to embrace these modes of travels (1 in 3).
In France, half of the motorists questioned claim to have done so (Fig. 41). 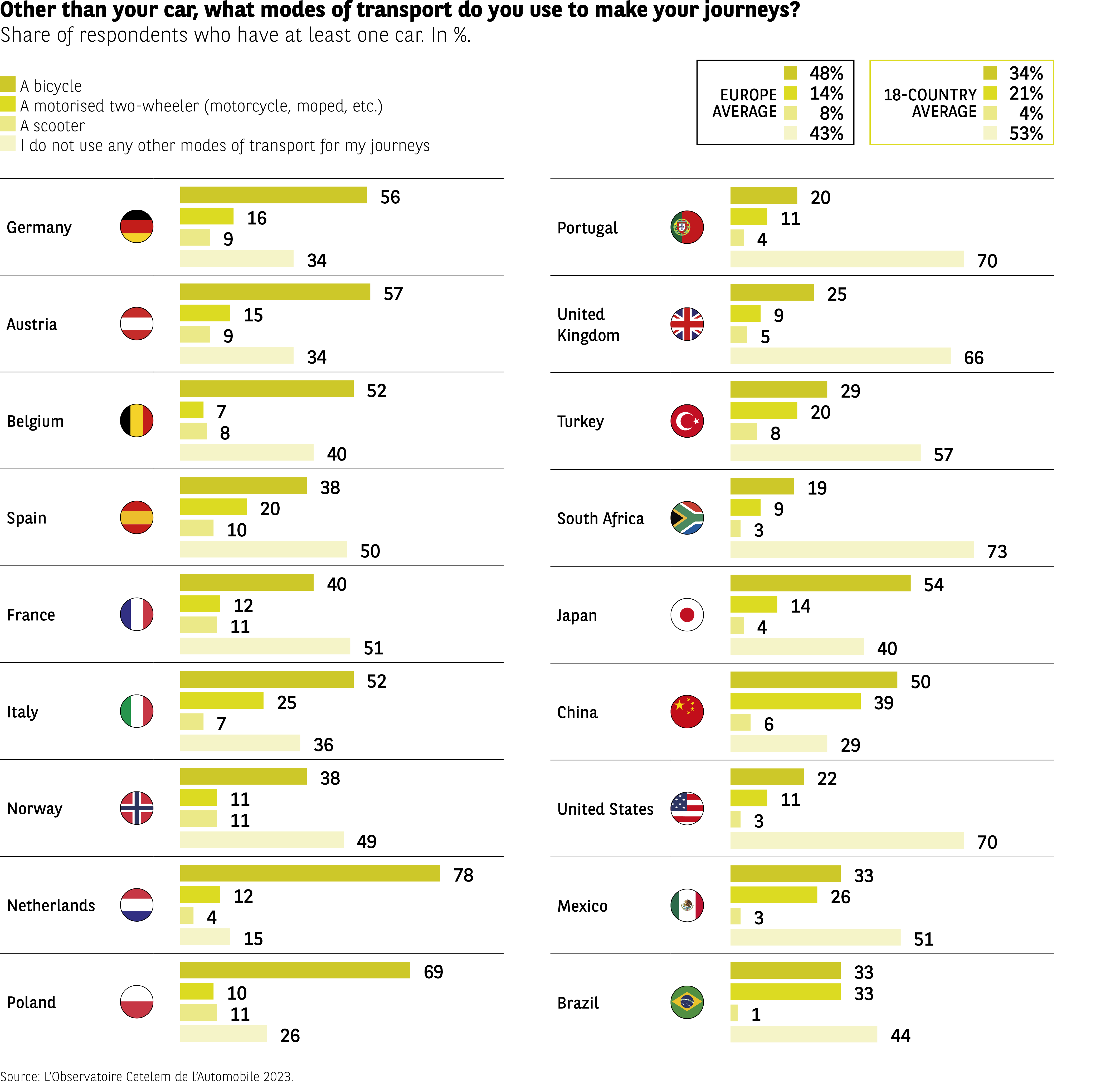 Download this infographic for your presentations
Almost 1 in 2 Europeans have adopted soft mobility alongside car use.

Even more positively, these greener approaches to mobility are gradually gaining ground. Soft forms of mobility are increasingly being used by almost a third of the motorists surveyed, a figure higher than the share who say they are using them less and less. As for all the other items, the proportion of motorists who no longer use certain means of transport is higher than the proportion who now use them more frequently (Fig. 42). 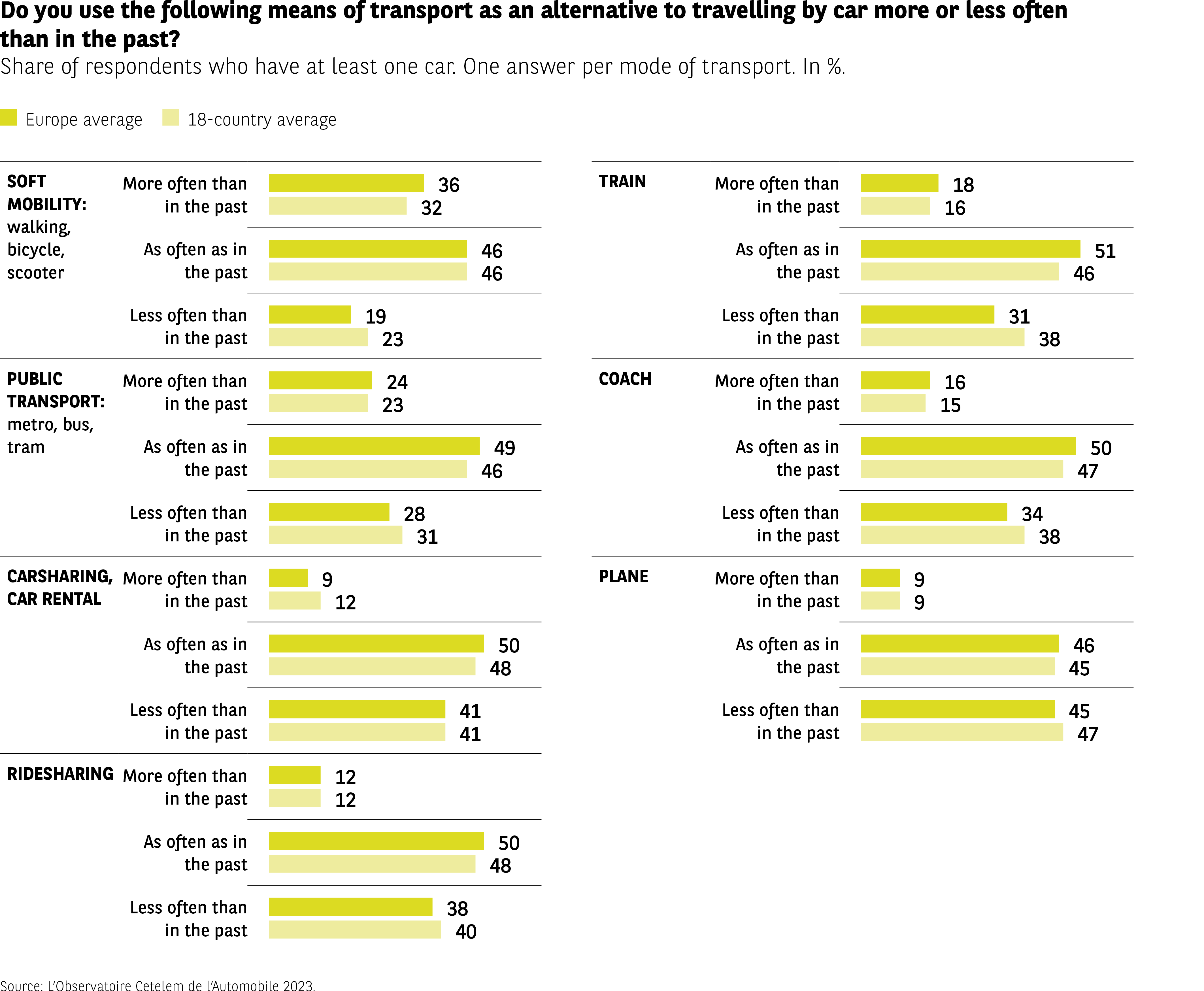 However, public transport, trains and coaches have been newly embraced by 23%, 16% and 15% of respondents, respectively. Generally speaking, the status quo remains to an extent, with about half of all car owners having made no changes to their travel habits.

To give a specific geographical example, respondents in Turkey seem to be the most willing to try every possible mode of transport that might offer a viable alternative to car use, which they consider too costly. Whether we are talking about soft mobility, public transport, trains, coaches, planes or carsharing, the Turks come top of the 18-country ranking. It is only beaten by China (by 2 pts) when it comes to ridesharing.

In the space of 5 years, e-bike sales have tripled in Europe.

The electric bike and scooter phenomenon

On the topic of soft mobility, it is worth taking a closer look at bicycle and scooter use in Europe.
When one thinks of cycling, one inevitably thinks of the Netherlands, a country with an average of 1.3 bicycles per capita and whose city of Utrecht boasts the world’s largest dedicated bicycle parking area*. But if one talks about bicycles, it is impossible today to avoid combining it with the word “electric”.In 5 years, European sales of electric pedal-assist bicycles (or e-bikes) have almost tripled and now comfortably exceed 3 million units per year (Fig. 43). As for traditional bicycles, their sales have remained relatively stable at 22 million in 2020, across 28 European countries.
By comparison, Chinese sales of e-bikes alone reached 16 million units in 2020.
In France, they accounted for 24% of total sales in 2021. In Germany, the market share of e-bikes is even higher, at 40%. A report on mobility published in 2019 revealed that sales were highest in rural areas and among seniors. In the Netherlands, more and more traditional cyclists are also switching to e-bikes.

As for scooters, the picture is even rosier. In France, sales increased ninefold between 2017 and 2021. The million unit sales per year mark will very soon be passed.

The widely varying cost of alternative forms of mobility

Comparing the cost of alternative modes of transport reveals significant variations between the countries. It should be noted that France has put in place a number of incentives to encourage its citizens to switch to other modes of transport (Fig. 44 and 45). 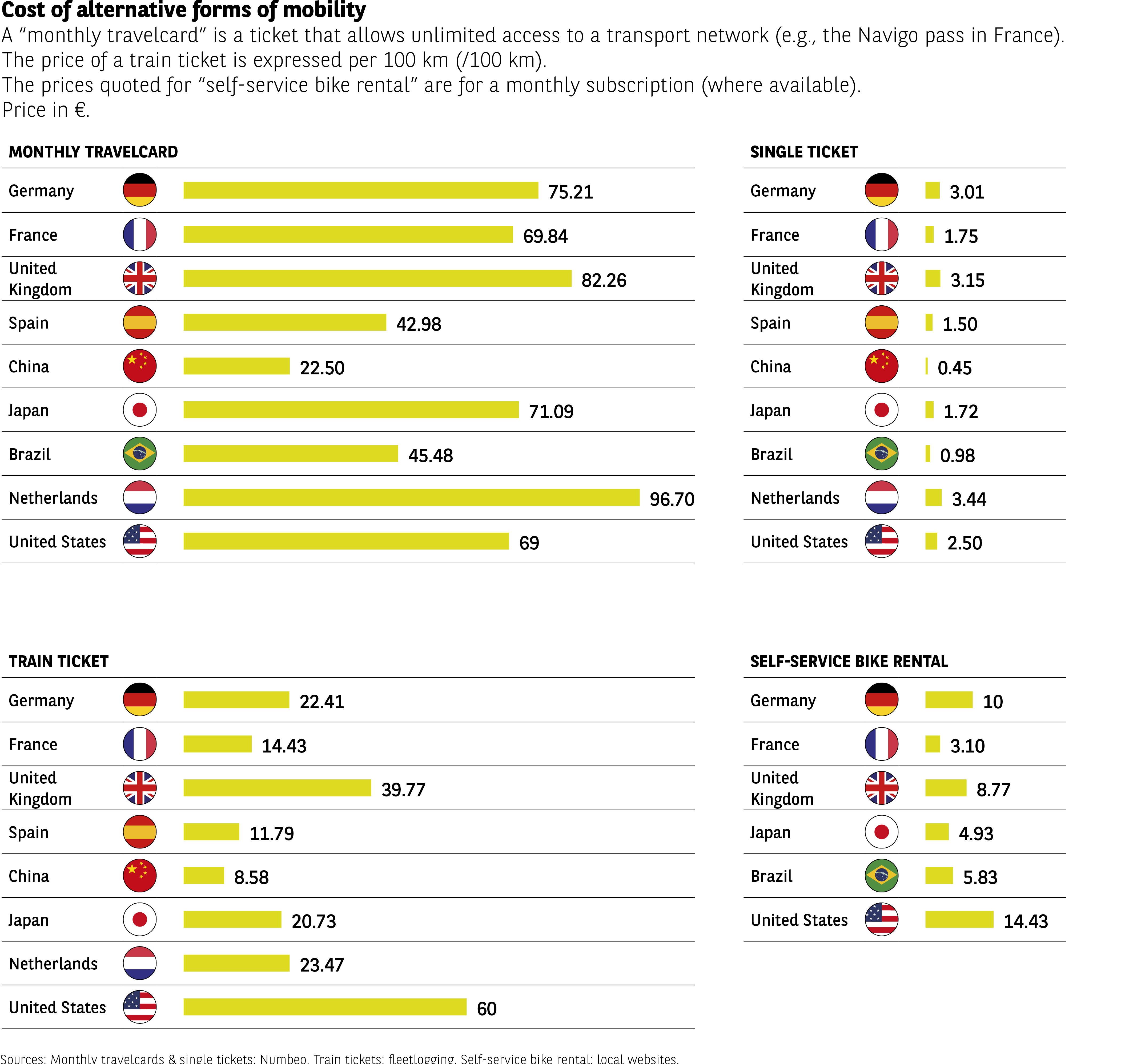 Soft mobility and rurality do not mix

The previous results show that there are fundamental differences of opinion between the rural world and the urban world when it comes to soft mobility. Two specific findings uncovered by this survey support this analysis.

In terms of daily journeys, a stark difference can be seen between rural dwellers, who have no choice but to use a car, and urbanites, who can do without one more easily. Indeed, 56% of those in rural areas rely on their vehicle each day, while this is true for just 35% of urban residents (Fig. 46). Daily car use in rural areas is primarily a Western phenomenon. This is backed up by the fact that the highest rates are to be found in the United States, the United Kingdom, Germany and France, four countries where the automotive sector plays a key economic role. 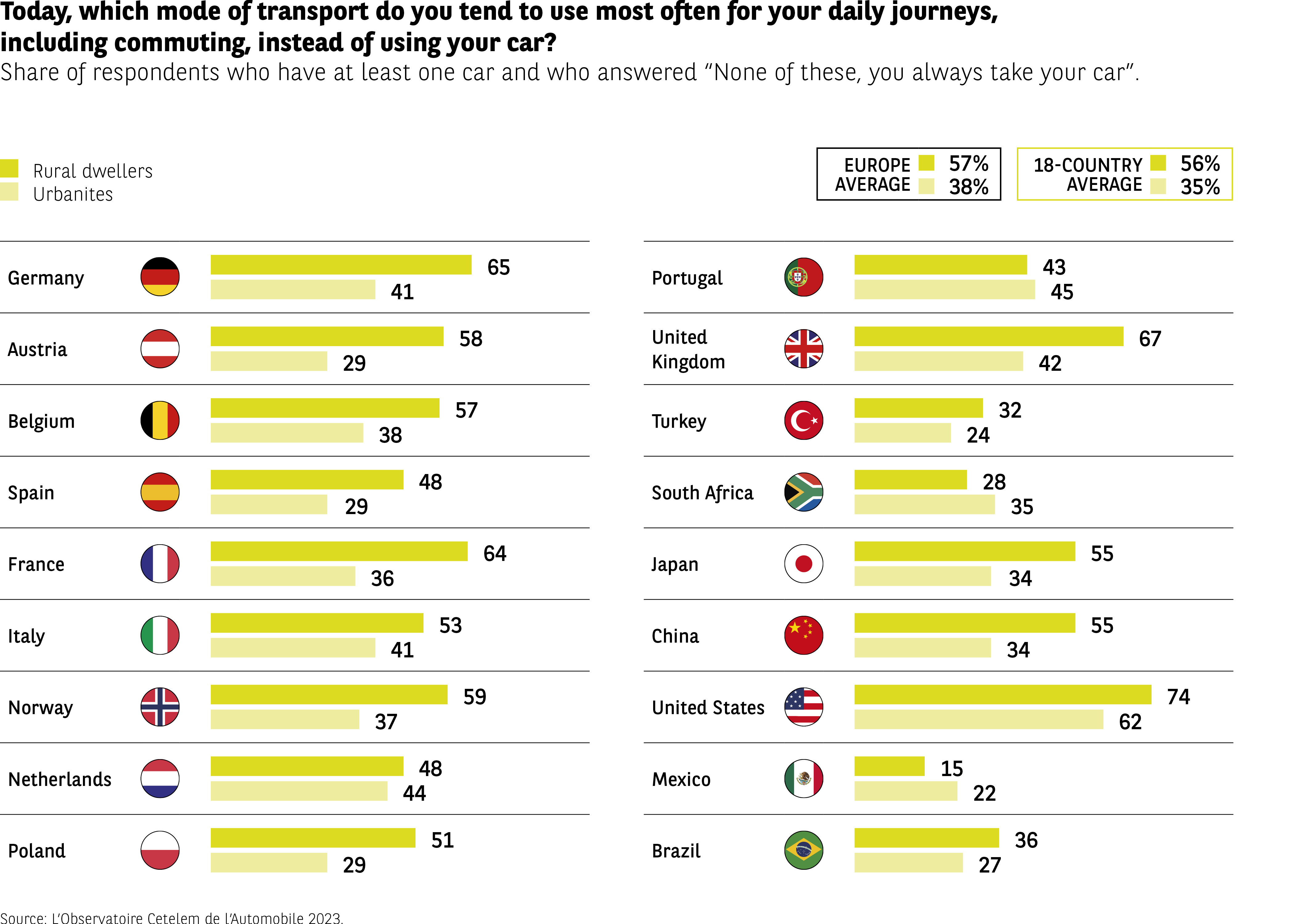 Sub-section 5
It’s hard to live a carless life
Going back in history, especially pre-history, mankind was nomadic.Mobility was essential to both the survival and security of humans. Since the early 20th century, this mobility has been embodie
< Read the previous sub-section
Sub-section 7
Cars: a source of exclusion?
Economy, stupid. This now-famous sentence was written in 1992 by future President Bill Clinton’s advisor James Carville, on a sign at their campaign headquarters in Little Rock. Looking at the
Read the next sub-section >